Years after years, Levoit continues to make the best budget air purifiers, to the point where some new customers may forget about the Levoit LV-H133 or LV-H134. To be sure, the company appears to be a market leader in the low-budget segment and will now enter the mid-range segment with the all-new Levoit Core 600S. It will connect the company’s dream at winning the high-end and becoming the best air purifier brand. So, today we are happy to give you the first proper Levoit Core 600S Review.

Levoit manufactures the most popular air purifiers at a lower price, and despite the company’s youth, it’s reasonable to claim this is one of the top air purifier brands now available. The Levoit Core 600S would be the re-attempt at mid-range segment of the company, after the Levoit LV-H134 and LV-H135. So, get ready for our today Levoit Core 600S Review, and let’s see if the air purifier will be the next-gen winner of the year or not.

You know you’re getting a decent amount for your money. In fact, I believe it’s huge amount for money. The smart upgrade from the Levoit LV-H134 is so far the best, making the Core Series one of the best deals for less than $300. Also, some upgrades seem pretty minor – better fan power and lower power consumption – but the overall user experience is great. The power onboard outstrips any air purifiers in its range for heavy tasks and it’s bound together by simple smart control.

If you want a big flagship air purifier from Levoit, that you’ll enjoy for years, this is it. Levoit asks only $299 for the new Levoit Core 600S, meaning it’s $100 less than the starting price of the LV-H134. It also implies the imminent release of the Levoit Core 500S, which, in my opinion, will drop the price of the Core 400S and Core 300S to a more attractive level.

Well, it appears as though the Levoit Core 600S will create new competition in the same manner that the Core 300 did in the past. Simply put, this is one of the leading contenders for the best air purifiers in the world right now. It simply overthrows the Blue Pure 311 Auto and Airthereal AGH550 for its money, and a next step from the Coway AP-1512HH and Winix AM90.

Again, we’re proud to give you the best deal for the Levoit Core 600S.

Levoit Core 600S, just like its previous flagship predecessor LV-H134, changes the traditional design concept of its family. So there is no simple cylindrical shape that makes Levoit air purifiers compact, we have a strong, solid-base device with this Levoit Core 600S. Instead, the rectangular shape is back again, aping the design of the LV-H135 for the last few years.

We’ll get this out of the way now: if you’re looking at the Levoit Core 600S as your next air purifier, you surely have to know you’re getting a massive device. And it is massive. This is not an air purifier for those wanting something that you can put on small bedroom, as at 23.6 inches in height, the Levoit Core 600S will be bigger than the Blue Pure 311 Auto – a more appropriate option for bedroom. Other dimensions are 12.3 inches, so you want performance, and you’re ready to sacrifice the space for it.

It’s not really bad if you look at the old line-up of Levoit, specifically LV-H134 and its brothers, Levoit LV-H133 and LV-H135. But from the new Core Series, it’s about 30% bigger than the Levoit Core 400S.

Let’s start by looking at how it’s put together. In my opinion, it is less appealing than the previous flagships, since Levoit places a higher premium on performance and simplicity than on aesthetics. As I previously stated, the Levoit Core 600S is not designed to be compact, and if you have limited space, I would recommend the Blue Pure 311 Auto instead.

The Levoit Core 600S, on the other hand, retains the classic VortexAir Technology and is promoted as being more powerful. When the 360° air intake is combined with the strong fan and bottom-to-top air flow system concept, the Levoit Core 600S is capable of taking on even the largest space, which is rather astounding.

We still have the same top control panel as its previous brothers in Core Series, so anyone want to upgrade will not miss the experience.

The Levoit Core 600S cuts off a lot of heavy material from the LV-H134 to weigh only 13.6 lbs. It also makes the device suitable for its asking price, but I still wish we could have the casters.

The most important criteria to decide the power of one air purifier is its air filters. Basically we will look at how many filters it has and the air filter types are used. The Levoit Core 600S sticks to its signature air filtration system with only 3 mechanical stages.

Levoit names its next-gen air filtration system as HEPASmart technology, which is kind of gimmick similar to the HEPASilent technology of Blueair. Nonetheless, its air filters operate better and the all-in-one filter can last longer.

For those familiar with Levoit air purifiers, the 3-stage air filtration system is the company’s most basic way of air cleaning. It is the easiest option to obtain CARB (California Air Resources Board) certification for air purifiers that comply with the 0.050 parts per million ozone emission limit (ppb).

However, this is merely theoretical, and at Breathe Quality, we believe only in performance testing. This time, the Levoit Core 600S will run in the same condition as the old LV-H134, and I will let it face the most powerful candidates in the mid-range best air purifiers segment, like the Airthereal AGH550, Blue Pure 311 Auto, Coway AP-1512HHS and Bissell air320. As you can see, the Levoit Core 600S is a clear winner, cleaned 99.93% of particles down to 0.3 microns in 300 square feet, after only 1 hour.

The new Core 600S-RF filter is now available, and because it is an improved filter, it has a longer life expectancy of up to one year. You can get the filter replacement from our below deal.

The Levoit Core 600S is the best flagship air purifier Levoit has ever made, with an impressive fan power. The company even suggests it to 1588 square feet, which is 2x the suggested room size for the previous LV-H134. A quick explainer if you need it: the Levoit Core 600S is perfect for ultra-large, open-concept spaces ranging from living rooms to lofts, apartments, offices, kitchens, even basements.

According to the Energy Star test, I would recommend the Levoit Core 600S for rooms up to 600 square feet, which is pretty astounding.

The CADR of Levoit Core 600S is 373 Dust/ 377 Smoke/ 437 Pollen (cfm). This CADR rating is better and far more effective than even the LV-H134. It is definitely a luxury extra and better upgrade from the Core 400S, and it serves for even whole house if you need.

High fan power commonly equals high noise level. However, any Levoit Core air purifiers must be suitable for sleeping, so the sound level should be low enough. What was noticeable was that the Levoit Core 600S can trim the silent operation to just 26 decibels, and it matches its smaller brothers easily. You won’t notice it is running for certain.

On high fan power, the noise level maintains at around 55 decibels (db), which is pretty much the common noise level for a big air purifier. Don’t get me wrong, it is good for such a powerful air purifier, and I would recommend to use this air purifier almost anywhere, anytime.

Its own Smart Sensor also enables the Levoit Core 600S to keep silent most of the time.

A good air purifier is designed to run for a long time to be more efficient, making the high-priority question in Breathe Quality is: “Do air purifiers use a lot of energy?” To know the answer, we will need to check the power consumption of this air purifier.

Levoit is touting all its new line-up to be rated by Energy Star, and the Levoit Core 600S doesn’t stay out of this trend. The power consumption is pretty impressive, with its own rated power of 49 watts, the Levoit Core 600S has the best CADR/power rate. It is at least double the performance/power ratio from the famous Levoit Core 300.

Levoit’s new series of air purifiers almost perfectly meets our criterion for the best air purifiers, including not only superior performance but also innovative smart features. Yes, we now need the smart features and convenience as much as fresh air.

The original Sleep Mode is widely used since it keeps the air purifier on the lowest setting during the night. It works with a light sensor, which automatically turns off display night and limits the fan power for not disturbing your sleep.

The convenient smart control is one trait of new Core Series, and the flagship Levoit Core 600S works best with the VeSync app. Whether you’re at home, work, or on vacation, the free VeSync app lets you set timers, manage settings, and check the life of your filters. It also gives you notification of your air quality with helpful graphs.

If meal preparation and household tasks keeping your hands full, link the Levoit Core 600S to Amazon Alexa or Google Assistant to issue voice commands. In addition, the Levoit Core 600S has memory function, so you can resume all the last setting for quick and convenient set up.

Finally, we have a LED indicator for filter replacement.

Levoit has balanced an impressive amount of power with quiet operation and smart control, for ease of use. You can enjoy both the Auto Mode and Wi-Fi capability of this Levoit Core 600S, and don’t need to spend that much of the old Levoit flagship.

Thus far, this is the best Levoit air purifier available, and I would likely recommend it to anyone looking to purchase a single air purifier for their house.

Levoit Core 600S is something you would buy at half of other flagships’ prices. 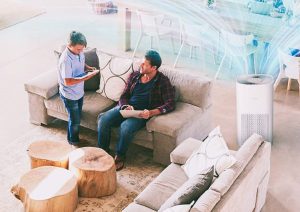