Updated: The new Levoit Core 600S is out, which is the current flagship of Levoit.

Levoit may now be the most popular air purifier brand in the world, not just in North America. With superior customer service and quick innovation in the manufacture of air purifiers, Levoit will maintain its leadership position for years to come. The Levoit Core 300S is predictable, but it’s arguably the most important one yet. Everything with the Levoit Core 300S suddenly becomes just a bit better. Let’s find out in our today Levoit Core 300S Review.

The Levoit Core 300S isn’t a game changer for Levoit’s series of air purifiers, since I doubt the original Levoit Core 300‘s sales are declining. However it’s an important iteration that offers the required smart features than the devices that have gone before it. If you’re looking for a smart and capable air purifier, this is a top choice.

Why do I refer to the Levoit Core 300S as a device that is predictable? The Levoit Core 200S and Core 400S, which were introduced last year, are a strong indication that the Core 300S will be available at some point. It does include a slew of new features, more particularly smart functions, but it does not significantly improve upon the previous Core 300. For some, this isn’t a compelling incentive to upgrade.

However, the availability of the Blue Pure 411 Auto and Winix A230 will be a primary reason to expect that the price of the Levoit Core 300S will be decreased in the near future. Still, the Levoit Core 300S may be a bit superior than the rest of competition because to its tailored all-in-one air filter and intuitive Wi-Fi capability.

While at first glance the Levoit Core 300S may not seem like a great leap forward for Levoit, the Auto Mode, Smart Sensor and other smart features all add up to be a worthwhile upgrade for anyone who’s coming from an older air purifier device.

Again, I believe the Levoit Core 300S will be a hot topic in the near future. Therefore, anyone in need of a new air purifier would be advised to take advantage of our discount on this air purifier right now.

The Levoit Core 300S features its signature cylindrical shape and real 360 degree air inlet, something that you loved from many other Levoit devices. That means the design will enhance the bottom-to-top air flow system concept from the very first LV-H132. This air purifier is designed to be placed virtually anyplace in your house without limiting the performance.

So to say, we have a compact 14-inch air purifier with 8.7 inches in diameter. You certainly can put the Levoit Core 300S tabletop or on the shelf. It also looks tougher than its little brothers, but I still wouldn’t recommend putting this claim to any drop test.

At the time of writing, the Levoit Core 300S comes with only one color option, unlike its previous Core 300 model. It is plain, but looks sophisticated, with the Levoit logo taking center stage. There is a vent for the air sensor behind the back of this air purifier.

If you truly want to know the difference between the Core 300S and the original Core 300, look at the top control panel. Undoubtedly, the Levoit Core 300S requires a new display to accommodate additional built-in functions. Other than that, we have the same air outlet grill style.

To determine the performance of this device, we will typically examine the quality of the air filters, the quantity of air filters, and the air filter types in the system. The Levoit Core 300S, like the original Core 300, has the same 3-stage air cleaning system.

The Levoit Core 300S’s all-in-one air filter has been enhanced with an airtight sealing strip to guarantee that impurities are contained within the air purifier. This seal is required to ensure the air purifier’s stability and its capacity to catch up to 99.97 percent of particles as small as 0.3 microns. Levoit called it HEPASmart technology, which I see as a direct response to the well-known “HEPASilent technology” used by its closest competitor – the Blue Pure 411 Auto.

Additionally, Levoit Core 300S offers customizable choices, including the conventional air filter and three additional options: Pet Allergy, Toxin Absorber, and Mold & Bacteria. Pet Allergy has a higher-grade granular carbon filter that enhances the adsorption of pet and culinary odors, while Toxin Absorber effectively eliminates chemicals, gases, and formaldehyde. Finally, a new layer of antimicrobial treatment has been added to the Mold & Bacteria filter, preventing the formation of mold spores and bacteria. I find it somehow like the high-end Rabbit Air MinusA2, which is still one of our best air purifiers at the moment.

At the $149 range, however, the power of the Levoit Core 300S doesn’t really impress me as the original Core 300. It is still one of the best performers with good result of capturing 99.9% airborne particles down to 0.3 microns. So to say, it is better than many common air purifiers out there like the GermGuardian AC5250PT, Pure Enrichment PureZone Elite, Hunter Digital Medium Tower HP400 or LivePure Sierra.

We will use the Core 300-RF filter again, that needs to be changed after 6-8 months for optimal performance.

Levoit dubbed their new VortexAir technology VortexAir for the company’s last three Core air purifiers, which are basically the same as the original Core 300. As an Energy Star certified product, the manufacturer recommends using the Levoit Core 300S in a room of 215 square feet, which is ideal for a bedroom.

The ACH of Levoit Core 300S is 5X. The new fan power technology enables the Core 300S to maintain as much power as its predecessors while cleaning the air every 12 minutes.

The CADR of Levoit Core 300S is 134 Dust/ 126 Smoke/ 154 Pollen (cfm). It is essentially identical to the original Core 300, despite the fact that our test result differs a bit from the Energy Star rating.

For a time, Levoit nicknamed QuietKEAP technology because of its famously silent functioning, instead of the old Bionic Damping technology. Surprisingly, with high fan power, the Levoit Core 300S’s AC capacitor motor produces less noise. While it is not as efficient as a contemporary DC motor, its noise level of 22 decibels is rather amazing. At its lowest setting, this air purifier is completely silent, and I dare to say this is the quietest air purifier from Levoit lineup, together with the Levoit LV-H128.

On highest speed, the Levoit Core 300S produces only 48 decibels (db), the same as the noise level of air conditioner at 100 feet. Even though you’ll hear some noise, it’s not loud enough to be bothersome.

An air purifier is designed to run for a long time to be more efficient, making the high-priority question in Breathe Quality is: “Do air purifiers use a lot of energy?” To know the answer, we will need to check the power consumption of this air purifier.

Since the Levoit Core 300 was already very energy efficient, the new Core 300S’s AC capacitor motor enhances that efficiency even more. With a power consumption of just 26 watts, it is on track to consume less than half the electricity of the previous model. It has a well-deserved Energy Star rating, and it should be the best air purifier for baby room.

Now, if you use the Levoit Core 300S for eight hours every day, the annual cost will be roughly $9. With the Auto Mode, you may save more money on your power bill.

Isn’t that why you purchased the Levoit Core 300S? All three of Levoit’s current models, including the Levoit Core 300S, include and enhance the VeSync app, making it one of the best air purifier apps for smartphones. Whatever ordinary people say about smart features being snake oil, I believe this is the way air purifiers will evolve in the future.

We do, however, have another term for such a widespread technology: AirSight Plus technology… It is the standard Smart Sensor used in all air purifiers, however I must emphasize that the Levoit Core 300S will utilize a laser dust sensor to provide an air quality reading more quickly. However, the Levoit Core 300S is a little behind the Blue Pure 411 Auto due to the absence of an odor sensor.

Auto Mode and Smart Sensor are without a doubt the most anticipated features that will complete the original Levoit Core 300. What could be better than just turning on your air purifier and breathing clean air without having to fiddle with the settings?

Using the VeSync app, you may regulate and monitor the indoor air quality of the device at any time. The Levoit Core 300S, which has been developed since the Core 200S, is the company’s smartest air purifier to date. You may also use Alexa or Google Assistant to operate the device using voice commands. That’s what you don’t have in the competitor Blue Pure 411 Auto.

Apart from that, the Levoit Core 300S retains all of the features found on its predecessors, including a timer, child lock, and a basic but vital LED indication for filter replacement.

If you own a Core 300, the Levoit Core 300S likely isn’t for you, as there’s not enough that’s new here in terms of performance. If you love the Core 300 and want the taste of a smart and comfortable air purifier, you definitely should buy this Levoit Core 300S.

That is, for anyone in the market for a new air purifier, the Levoit Core 300S is unquestionably one of the best options available. It’s an excellent choice for the bedroom, and much better for the infant room and nursery. Once you’ve purchased this air purifier, you’ll never look back.

The final upgrade of the best-seller Levoit Core 300. 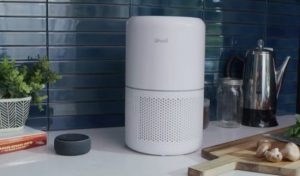