The “budget” member of the Levoit family – Levoit Core Mini, comes a bit late, but it wraps all the air filters into one from the popular Levoit LV-H128. Moreover, Levoit found a way to trim the budget even lower. Now, we should be on to the specific Levoit Core Mini Review.

Levoit scores two new air purifiers to start the new 2022, and the Levoit Core Mini happens to trim the price point even far under the budget bar. On paper, this air purifier is a device you should get for a very small bedroom, with lower starting price than the last year’s Levoit LV-H128. However, if you’re looking for a comparison between two budget models of Levoit, you really should read our today Levoit Core Mini Review.

The Levoit Core Mini really challenges the idiom ‘better late than never’: arriving around one year after it was expected, and let the Levoit LV-H128 be unstoppable in $50 range. We are familiar with the Core Series of Levoit at the moment, and finally this little brother Levoit Core Mini is here in 2022.

This is purportedly the budget member of the Core Series range, while the Levoit Core 200S and next-gen Levoit Core 300S stomp on the higher-price budget range. However, the Levoit Core Mini is only able to serve in much smaller room area, and it also asks for a much lower price because of a few select downgrades that average air purifier users will notice.

Right off the bat, the price of the Levoit Core Mini is $49, which is $10 lower than the last year’s LV-H128. Basically, it is meant to be the LV-H128 with signature Core Series’ design. So to say, we’re looking for a new champion of the best air purifier for bedroom.

Still, it’s up to our today review. You should be aware that the most competent alternatives are the TCL Breeva A1 and Black+Decker BAPT01, both of which are manufactured by large electronics corporations. Also, if you don’t really need the aromatherapy function, the Levoit LV-H126 and GermGuardian AC4150 could be found for less.

The Levoit Core Mini’s pricing is quite appealing, and its similarity to the best-selling Levoit Core 300 ensures that it will be a future champion in the sub-$50 market. If you wait around 2-3 months, the price of the air purifier may drop to the point where it is a no-brainer purchase.

Budget-friendly choice for a budget air purifier. Energy Star rating. Safety assurance with ETL listed and FCC certified. Save $5 with our deal.

First look, you’d be forgiven for confusing the Levoit Core Mini with its big brothers, because other than its size, it’s a dead ringer for the vanilla and smart members of Levoit Core Series family.

Of course, its name is Core Mini for a reason. The Levoit Core Mini is significantly smaller than the majority of air purifiers available. With a height of 10.4 inches and a diameter of 6.5 inches, this air purifier has a slightly smaller footprint than last year’s LV-H128.

As with the rest of the Core Series, the Levoit Core Mini features a bottom-to-top air flow system concept. You’ll love the fresh air coming from the top air outlet, which includes a one-touch control panel in the middle.

There are two color options for this new Core Mini air purifier, and if you’re looking for the black model, you can get it from our below deal.

Finally, the weight of Levoit Core Mini is just only 2.2 lbs. I can’t believe it, this is certainly the most light-weight air purifier I’ve ever tested.

Levoit has always relied on its own three-stage air filtration technology, and the Levoit Core Mini is no exception. One possible reason is because Levoit is a California-based corporation. The following is a breakdown of the air purification system.

The Levoit Core Mini is equipped with a HEPA-type air filter capable of capturing just 97 percent of particles as small as 0.3 microns, according to the manufacturer. Such performance is a bit lower than the common H13 HEPA filter made for the Levoit LV-H128, but we should head on to the real performance test to see its real-world result.

In our standard test for budget compact air purifiers, the Levoit Core Mini did a bit better than it is claimed. In a room of 100 square feet, the Levoit Core Mini cleaned 98% of all particles down to 0.3 microns in just 1 hour, which is only 1.5% lower than its brothers and some big guns, like the TCL Breeva A1, Black+Decker BAPT01 and Pure Enrichment PureZone Breeze. However, it is better than the more expensive Bissell MyAir.

You need the new filter Core Mini-RF for this Core Mini, which starts at $24. The air filter needs to be replaced after 4 to 6 months, depending on the running.

Though some of the specs from LV-H128 are different, the Levoit Core Mini is recommended for use in small spaces up to 178 square feet. Levoit would even say that it may be used in larger rooms, but cleaning will take longer than usual.

The ACH of Levoit Core Mini is 2X. Running the air purifier in its manufacturer’s suggest room, the device will clean the air up to 2 times per hour.

The CADR of Levoit Core Min is 45 Dust/ 34 Smoke/ 32 Pollen (cfm). Its fan power is comparable to that of the Levoit LV-H132 from the past, implying that its fan power is actually superior due to its smaller size.

Additionally, Levoit Core Mini’s compact form allows it to fit on any nightstand, table, or even bookshelf.

An air purifier is designed to run for a long time to be more efficient, making the high-priority question in Breathe Quality is: “Do air purifiers use a lot of energy?” To know the answer, we will need to check the power consumption of this air purifier.

No need to worry about the air purifier’s power consumption, as the Levoit Core Mini is Energy Star rated. This air purifier has a rated power of only 7 watts, which is even lower than the LV-H128.

If you run this air purifier 8 hours each day, you only need to pay $2.5 per year.

The Levoit Core Mini is basically the revised version of the LV-H128, as it features just only the aromatherapy feature. You can add essential oils to the aroma pad, and the air purifier will disperse it on fresh air, creating relaxing and energizing working space.

Apart from that, there is simply a single LED indicator for filter change. For this reason, the Levoit Core Mini is missing the LV-H128’s Light Dimmer option.

Budget-friendly choice for a budget air purifier. Energy Star rating. Safety assurance with ETL listed and FCC certified. Save $5 with our deal.

To be clear, the Levoit Core Mini is a good candidate to put in the $50 range competition, with additional aroma feature and great silent operation. However, it cuts down a few from the LV-H128 which is dominant in this range, and you can find it available for the same, or less. Alternatively, you could wait for the upgraded performance, as Levoit is always improving their products. 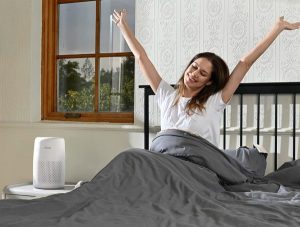