The Levoit Core 400S doesn’t pack anything game-changing right now, but it’s the start of something bigger. Yes, it is. As the latest model of the most successful series of Levoit, the Levoit Core 400S is the brave step into the mid-range, which is accomplished by the Levoit LV-H133 in the past. But this time, Levoit is the top selling brand, and I believe it will consolidate the position of the new Core 400S. Ready for the most trusted Levoit Core 400S Review?

Updated: The new Levoit Core 600S is out, which is the current flagship of Levoit.

Levoit is confidently the #1 selling air purifier brand in the US right now, after many rewards and recommendations for the famous Levoit Core 300 (which Breathe Quality was proud as the first to mark it as “the best budget air purifier”, up until now). The Core Series of Levoit family completely overshadows the origin Levoit LV-H132 and Levoit LV-PUR131S, and that’s the sign of a big change. In this Levoit Core 400S Review, we will find out whether the Levoit Core 400S will be the best “under $200” air purifier or not.

It’s easy to dismiss the Levoit Core 400S if you’re a hardcore fan of Levoit brand, especially when you consider it as a smaller Levoit LV-H133 with more smart features, or you just look at the mini Levoit Core 200S as an option for bedroom.

However, the smart features are rapidly rolling out across the low-range, with the entry-level Blue Pure 411 Auto and Blue Pure 311 Auto top every list of Best Air Purifiers. Also, the Winix AM90 is groundbreaking for offering high-end features at just a fraction of the price. Certainly both the old LV-H133 or Levoit LV-PUR131S aren’t enough to compete against.

So, introducing the new Levoit Core 400S, an air purifier that will combine anything you desire in a more expensive device, yet it is powerful and affordable. How much does it cost? Levoit Core 400S starts at $219, but I assure that you will get a better deal from us as usual, down the price to only $189.

At this price point, the Levoit Core 400S is certainly a good option to consider other than the Winix AM90 and/or Coway AP-1512HH. Check out all the reviews before you buy.

The Levoit Core 400S’s design hasn’t radically changed from the last few versions of Core Series, and it’s only bigger. However, with the dimensions of 20.5 x 10.8 x 10.8 inches, this air purifier is indeed smaller than both the LV-H133 and LV-H135.

As mentioned the Levoit Core 400S has Core’s signature cylindrical shape and real 360 degree air inlet, something that you’ll miss from the LV-H133. Its bottom-to-top air flow system concept is popular, and it will utilize so-called VortexAir 3.0 Technology for more effective air circulation. As a result, it can maximize fan power in a more compact form than the old Levoit devices.

The top of the air purifier is identical to the LV-H133, with a (in my opinion) more sleek control panel at the center. It also has a premium feel, and I must confess I prefer using the control panel to managing on smartphone app.

Just like other Levoit Core air purifiers, you need to flip the device then remove the filter cover to replace the air filter. Luckily, the Levoit Core 400S is on the light side, as it weighs only 11 lbs. There is a handle behind the air purifier, to help you lift the device easier.

The most important criteria to decide the power of one air purifier is its air filters. Basically we will look at how many filters it has and the air filter types are used. The Levoit Core 400S follows Levoit’s “only-mechanical-filter” motto, so I am not surprise to see (again) the 3-stage air cleaning system.

For everyone who knows Levoit air purifiers, the 3-stage air filtration system is the rudimentary method of air cleaning from this US company. It is the quickest way to get the certification of the CARB (California Air Resources Board) for air purifiers that meet an ozone emission concentration limit of 0.050 parts per million (ppb).

Levoit calls their new HEPA filter as HEPASmart technology, which is kind of gimmick like the HEPASilent technology of Blueair. However, HEPASmart is first named in the new Levoit Core 400S, and despite of the specs, I believe the core H13 True HEPA filter of this air purifier is just the same as any old Levoit devices.

And the Levoit Core 400S did really great for the stress test, as it can clean 99.92% of all airborne particles down to 0.3 microns in a space of 200 square feet, after 1 hour. Yes, you may argue that it is still behind the competitors like the Coway AP-1512HH, Winix AM90, Blue Pure 311 Auto or Honeywell HPA300, but you need to see that the difference is really, really small. Given its more affordable price tag, I can call the performance/value ration is quite similar.

The new Core 400S-RF is the filter replacement you need to follow. Thanks to the VeSync app, you can keep track of when to replace the air filter, typically 6 months.

Levoit Core 400S is a low-range air purifier with large room capability. As you can see, the suggested room coverage of this air purifier is up to 403 square feet, which is suitable for a living room of many large houses in the US.

The ACH of Levoit Core 400S is 5X. Thanks to its new VortexAir technology, the air purifier can purify the recommended space for up to 5 times per hour.

The new QuietKEAP technology of Levoit is what makes this device significantly exciting than older models from this company. Using rubber pads to absorb sounds made by the fan, Levoit Core 400S can trim the noise level lower, even with higher fan power. Yes, on lowest speed, the noise level is measured to just only 24 decibels (db).

The highest noise level of this air purifier is just 52 decibels. Levoit Core 400S has lower noise level than household refrigerator a lot, so I believe you won’t notice the noise anyway.

A good air purifier is designed to run for a long time to be more efficient, making the high-priority question in Breathe Quality is: “Do air purifiers use a lot of energy?” To know the answer, we will need to check the power consumption of this air purifier.

Levoit Core 400S has the rated power of 38 watts, which is the average of LV-H133 and LV-H135. Such energy saving is on top compared with the best competitors, only lose by a portion of the best Blue Pure 311 Auto.

If you already own a Levoit Core 400S, you can be sure that it will cost you just $14 for running the air purifier at least 8 hours per day.

Top reason to buy the Levoit Core 400S above any other air purifiers at this moment is its smooth and intuitive Smart Control. Thanks to the VeSync app, you can control the device and monitor the indoor air quality. Developed since the Core 200S, the Levoit Core 400S is the smartest air purifier of this company up until now. You can also use voice control to command the device with Alexa or Google assistant.

Welcome back the laser air sensor from the flagship Levoit LV-H134, however this time the air sensor can only detect dust particles. With the Smart Sensor (named Airsight Plus) on, the Levoit Core 400S can scan your air for airborne particles and automatically adjust the fan speed to clean them out.

Other than that, the Levoit Core 400S still has any additional features you could have from its predecessors like Timer, Child Lock or simple yet necessary LED indicator for filter replacement.

The Levoit Core 400S is clearly a well candidate for the list of the Best Air Purifiers. However, it is quite tough to decide between this air purifier versus both Coway AP-1512HH and Winix AM90. The Levoit Core 400S may have better Smart control than the Coway and stable connection with its app than the Winix, but it has lower performance than both these devices. It also doesn’t have the gas sensor, which the Winix AM90 has.

Still, it is an amazing air purifier. And when I said “amazing”, perhaps I will consider it as one of the best air purifiers. Let’s wait for another 3 months.

An excellent air purifier from Levoit, and again, a blind purchase won’t disappoint you. 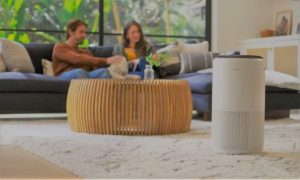